More
It Gives You Wings!!
Red bull does not give you wings, your muscles jitter and twitch so much that you just feel like you're floating. Their commercials are just terrible, each one more annoying than the last. 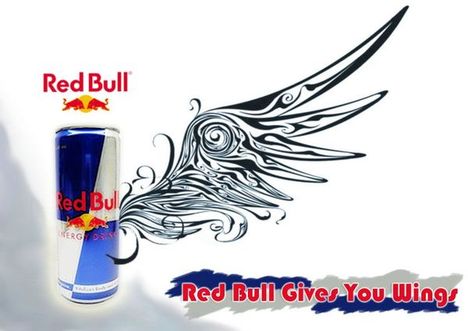 To whom it may concern,

I have some concerns considering your beverage "Red Bull". Now I've drank two cases of your 8oz. cans within the past three hours and I've come to the conclusion that they're defective. On your very informative and might I add amusing commercials, you depict a person having a sluggish and tiresome day. Luckily, a scientist suddenly appears and grants the near comatose person a sip of a special elixir they call "Red Bull". He then gulps it down, immediately vaulting into the air, sprouting wings and then taking off to the skies refreshed.


It is my unfortunate duty to inform you that not only did this not happen for me, but I've seriously injured myself in the process. You see, after countless futile attempts at trying to acquire wings through drinking your beverage I began to study your commercials more closely. I've learned that the drinker in the commercial is almost always in the air or hovering above the ground while he drinks. So, I decided to test this theory. Using my cousin's trampoline, I repeatedly bounced until I reached a height of about 7 feet off the ground. This was especially difficult considering I was trying not to spill the aforementioned beverage on myself or on my seven year old cousin's beloved trampoline that I had "borrowed".

After about six or seven bounces at what I felt was my peak height, I lunged forward while chugging from the can. Now, I cant remember exactly what happened next, but somewhere in between choking on the drink while soaring through the air and waking up in my cousin's backyard with dried blood on my face, I realized that your claims that "Red Bull gives you Wings" are completely false. Red Bull did not give me wings. In fact, Red Bull gave me a grade 2 concussion and a newly found fear of trampolines.


Please change your slogan. From what I hear I'm not the only one who has fell victim to your beguiling claims. If it is at all possible, can you send me instructions to properly sprout wings? Your help is greatly appreciated.

Thank you for reaching out to us.

Red Bull does not claim to give you wings. What we can tell you is that Red Bull gives you Wiiings! You see, there is a big difference between the two.

Our Wiiings vitalize the body and mind - whereas, the ordinary wings can only be found on pigeons.

Have a soaring day!

Thank you for the response to the email I sent weeks ago. Also, thank you for clarifying about the fanciful word "wiiings" that you use interchangably with the real word "wings". How heedless of myself to hear the phrase "red bull gives you wings" and actually believe that you meant what was said. I see that the qualtiy of your deception is at it's pinnacle.


I must admit that I too, am guilty of chicanery. You see Natalie, I had told my fiancée that for my bachelor party, my friends and I will be going camping in the majestic mountains of Appalachia.

However, what she doesn't know is that we will be going to New Orleans for Mardi Gras. I'm sure that if she ever finds out, she probably would laugh at her misinterpretation of what I said. Then she'll most likely tell me something along the lines of "have a soaring day!"

Ive been researching your commercials on YouTube and the anatomy of pigeons at work for the past 3 hours. Your imaginary word "wiiings" doesn't seem to be existent. Also after scouring the pages of Wikipedia, I've still yet to find anything concrete.

Please explain further about your "wiiings", I feel somewhat ashamed in myself for perceiving your slogan at face value and not for it's in depth content.