I've never been more disgusted in my life than the time I carelessly chugged some really cold milk that wound up being curdled. I don’t want to gross you out with the ensuing details, but let’s just say I can never look at cottage cheese of yogurt the same ever again. The smell still haunts me. 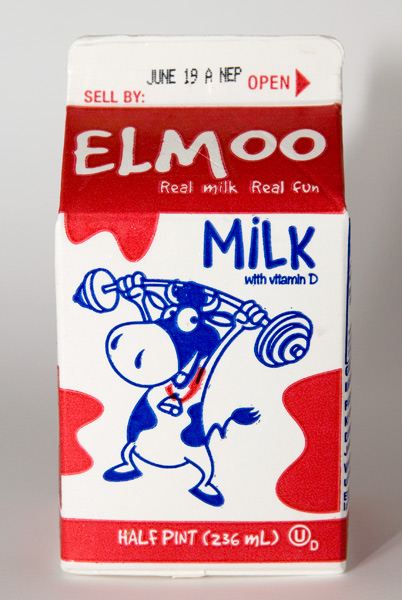 I have been a fanatical consumer of your fine dairy products for quite some time now. Every morning, you could always find me buried within the refrigerator searching for the last drop of sweet cow lactation to guzzle down. I find that the luscious creaminess of whole milk goes well after a day of strenuous exercise.

Just the other day after a grueling workout session, I quickly reached for a quart and drowned my stomach with some thirst-quenching chilled milk. It was so chilled in fact, that there were frozen ice chips of milk in the carton! There is nothing better than semi-frozen milk. It reminded me of when I was a child, the really nice Mr. Softee ice cream truck driver would give me free milkshakes and tussle my hair. Those milkshakes always made me really sleepy, but boy were they refreshing.

Much to my utter morbidity, I discovered something rather sickening. What I thought were delicious ice chips in my milk was actually tiny bits of frozen curds. I was in complete horror as the devastatingly sour taste overwhelmed my senses. My throat immediately initiated its gag reflex which projected the rancid moo juice from my stomach to the other side of the kitchen.

Standing in the wake of the high-velocity eruption was Aldwulf, my Persian cat. He had the same confused look on his face as the time I forgetfully fed him kitty litter rather than his kibbles. Doused in my regurgitated milk, his cat instincts kicked in; he had to just sample a taste of the fascinating liquid that he was now soaked in.

The second the tongue withdrew from his mouth, he immediately vomited on the floor. This of course was witnessed by my other cat, Dr. Schittmitons, who vicariously spewed on the couch. Please help us, my house smells like cottage cheese.