A Night Out With Spanish 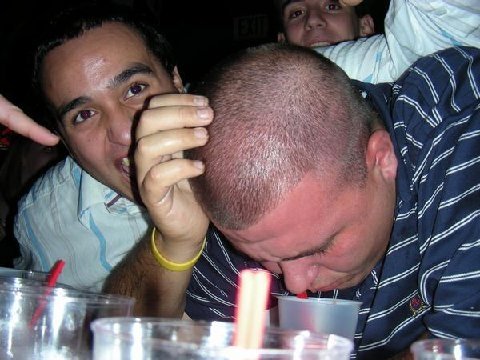 There are many stories I can tell you about my nightlife some that are fun and others that are sad. Well this story has a little bit of both, so here is a night out with Spanish.

This story takes place about five years ago in a New York City nightspot called Porky’s. The crew at the time consisted of Officer Patrick, Ro Shezzy, Q and of course myself. The night started with a bang as we started drinking right away and Officer Patrick had a little too much to drink really fast. His biggest mistake was drinking mixed drinks and the fishbowl together. Now you’re wondering what a fishbowl is? Well a fishbowl was these alcoholic drinks that was like a combination of a slushy and liquor in a fishbowl. As we continue to drink I look around the place to spot any hot ladies and that’s when I saw her. She was tall with brown curly hair, a lovely figure, pretty face and most of all a beautiful smile.

I had no idea what to say to her, so I decided to do something a little weird. As I got closer to her I took my wallet out and threw it by her feet. She looked down; I quickly picked it up and asked her “Is this yours?” she said “No” of course. She looked at me and said “Did you throw your wallet at me?” I looked at her and quickly replied “Yes”. She giggled and introduced herself to me. Now I don’t remember her name, but I know that she worked at a nail salon and that originally she was from California. The best thing about her was the fact that she was a Mexican. I have never met a beautiful Mexican woman in my life and for that moment fell in love. Now granted I did have some drinks in me, but that doesn’t matter. As the conversation started getting better her friend joins in the conversation. She was an African American woman who was 29 at the time and her objective was to hook up with a 21 year old guy.  I thought to myself “Get out of here you drunk, so that I can bag your friend”. All of a sudden my cock block buddy Ro joins in and of course he starts talking to woman I was talking to. I gave the evil eye which means get the fuck away from her she belongs to me you attention whore. Now all four of us are talking, when all of a sudden I see security run toward the table Officer Patrick was at and proceeded to kick him out the place. I had no idea where Q was and Ro was waiting to attack the woman I was talking to. So I decided to excuse myself and help my friend who got kicked out of Porky’s.

As I left the love of my life alone with Ro I went outside to see my old friend Officer Patrick throwing up in the fishbowl. I sat next to him rubbing his back and asking him “Are you ok”. He simply looked at me, then putting his face into the fishbowl and continues vomiting. As I stood by his side all I was thinking about was my Mexican angel and when will I see her again. As that thought came into my head she walks outside with her friend. The reason they went outside was friend wanted to smoke and also brag about the “young white boy” she hooked up with. As I look at Pat he continued of vomit and I thought to myself “He will be ok”. I walked toward her and that’s when I saw Him. He was a 6’4 Spanish guy who was ugly that’s all he was ugly. I said hi to her and we started chatting, but every word I was saying to her was always interrupted by Mr. Ugly. He was getting on my nerves and as I was about to say something I looked at my friend Pat. I told my angel I will be back and proceed to help my friend. As I sat back down I looked back at her and she was walking away with Mr. Ugly. She turned her head around and looked at me I knew what she was saying just by the look. The look told me that she wished I was by her side and not Mr. Ugly. I turned to Pat and he said to me “I’m good let’s go home”. I lifted him up and as he got up the fishbowl he was throwing up in was directly over my head. As his smelly vomit dripped down on my head I can only think is “How can a night start off so good end up so badly”.

Well this night didn’t end up the way I expected it, but hey that is life. Hopefully in the future I can end a story in which I get the girl and I live happily ever after.