It has come to my attention that Tropicana has recently spent around 35 million dollars to change the labeling on its Orange Juice containers. This of course meant that the beloved straw in the orange depiction will have to take a backseat to a new "fresher" look. Well surprise, surprise, this was a tremendous mistake and the backlash that this decision encountered was relentless. In fact, the response was severe enough that they immediately repealed their decision and put the old packaging back on the shelves.

I for one was disconcerted with the new packaging. I pondered as to who was the marketing genius that said, "Even though Tropicana Orange Juice has one of the most recognizable icons in the world, we should change the packaging to make it look like every other juice on the planet." This is as if the New York Yankees decided after 100 years of baseball that it was time to change their logo to a slice of pizza. 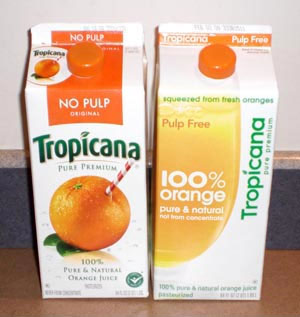 What the hell were you thinking Tropicana?

To whom it may concern,

I was recently drinking your Tropicana Pure Premium Orange Juice when your packaging began to worry me. Now I'm a huge believer in the benefits of vitamin C, I consume roughly around sixty four ounces of orange juice daily; so I'm always trying to figure out new and better ways to supply myself with enough to keep my body functioning correctly.


From examining the juice container, I found the picture depicting an orange with a straw in it to be quite misleading. I've attempted on many occasions to impale a navel orange with a straw and came to some disappointing conclusions. The first being that you need the strength of a steroidal lumberjack to actually break through the skin of an orange with a brittle piece of plastic.

Secondly, I've noticed when you don't break through the rind correctly, the straw slides down the side  of the orange usually resulting in me juicing my own hand. I've gouged my hands and wrists several times and through deductive reasoning, I've found that this task is one that even the hardiest of men cannot complete.

Lastly, when you finally penetrate the fort Knox-like outer shell of the aforementioned ball of citrus, trying to actually drink from the straw is a gross impossibility. I've spent the last nine hours squeezing and sucking through this straw and nothing but a seed was procured from this tropical fortress. Is there any way this is humanly possible? If not, is there anyway you can change your obviously misleading packaging?

Your satisfaction is important to us and were happy to explain the graphics on our cartons of Tropicana Pure Premium.

We 're sorry that you believe that the label is misleading. The iconic 'straw in an orange' image on the cartons accurately describes for the consumer the characterizing flavor of Tropicana Orange Juice - juice so fresh, it's like drinking it straight out of the orange. We're sorry if it confused you. I'll share your comments with the marketing team. Thanks for the feedback, Frank.

Thank you for your prompt, insightful response - it has really shed some light on what had become quite the puzzling concept for me and for that, I am forever in debt to you and your company. I must admit that I was fairly embarrassed while reading your response; had I known the depiction of the "orange with a straw" was just a metaphor, my face wouldn't be as ruddy as a fire engine.

Also thank you for forwarding my comments to the marketing team. I'm sure they'll be excited to hear from one of their lifelong customers. When does the marketing team congregrate? I'd love to sit in on a meeting as sort of a customer liaison as I can first hand criticize your different marketing schemes. I've prepared a PowerPoint presentation outlining the direct impact your orange juice has on the community and I'm sure our team would be delighted to sit through the brief 3 hour experience. I feel I would be a great asset as I can also provide useful information such as the "buzz" on the streets about your products. I'm available 9am-5pm Monday thru Friday so feel free to contact me to arrange a meeting.

Now of course good old Jeff never got back to me. Look for Tropicana to go out of business soon.